Bengali by Passion
I always feel excited whenever I think of my favorite cuisine ie. BENGALI CUISINE. My Bong friends would definitely agree to this because I can remember in childhood, I was always eager to share my lunch box with them. My interest behind mingling with them was simply to relish the true Bengali staple delicacy "Macch Bhat" which they used to bring along with another Bengali speciality Bengali dal, bhaja and aalo seddo (chokha). Mostly a basic Bengali meal consists of rice, pulses, vegetable and fish. Their jhol (thin) and jhal (hot) is a stew made in shorsher tel (mustard oil) seasoned with phoran cooked with ground chillies for red appearance and ground mustard for yellow appearance. 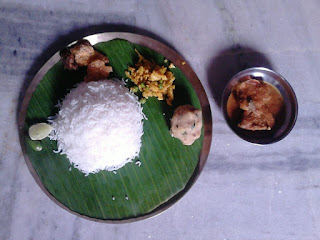 The language too has its own charm, pronouncement of O are often heard like for example Jabo, Aunno, Khabo, Nomoshkar, Dhonn o bad, Bhalo, Subho etc. Whenever, I use to  hear "tumi jol khabe"? I always had a big smile on my face with a thought that, Why Bengalis say like this, how anyone can eat water?  “Ami bhalo acchi” is the reply of my friend Debal, whenever I ask, “How are you brother?? Once I asked Debolina's Mother, Das Gupta aunty ,who used to live in the same apartment in which we lived, She told me that we believe in eating, so we love to eat anything and everything whether it's chai - cha or pani we use khabo….the phrase "Khaddo rasik Bengali r Bangaliana", says it all...

I was born and brought up in Bokaro steel city, a small city in Jharkhand. Earlier it was a part of Bihar. In British era, Bihar was separated from united provinces with West Bengal and Orissa on 1 April 1912. This happened after the British "divide and rule" policy. Orissa and Bihar share many cultural and linguistic similarities with Bengal. Bengali likes rice and fish if he or she is not vegetarian. Otherwise Vegetarian stuff also has their own importance in Bengal. They believe in freshly grown products. Where in Bihar Maithili who belongs to the same linguistic have common liking for Maach Bhat. Generally, Bihari's prefer rice with vegetable delicacies but they do enjoy fish and meat in their weekend too.

Sounds are that inevitable part of city's life which occupy our senses quite strongly . It comes from the busy streets or markets. Sundays were like such a day in Bokaro where Feri wale (Kashmiri people with woollen stuff),  Fishermen roaming  on the street with the fishes (in the bamboo basket) on the bicycle etc were easily seen all day. I always use to look for the hawker who use to sell mihi dana- a very thin sweet boondi, I loved it a lot.  Fishermen from Purlia, Chandrapura and Jaina Mor (these small town has many Bengali communities) come to sell  rui, katla and mangur in bamboo baskets, full of different variety of fishes. Selecting a good fresh fish was like an art which  my dad knew very well. He always use to first check the eyes, gills and fins of the fish, and then after proper inspection he proudly told us that gills of a fish should always be bright and red in color that is how one can tell about the freshness of the fish.

Rui, Katla, koi, Mangur, bhetki, ilish(hilsa), puti, topshey, chanda, khoira, mourala, chingri etc. No end to the varieties of fish available. Fish is always linked with happiness and auspicious occasions in the region. Hilsa fish and its oil were as valuable then as they are now. 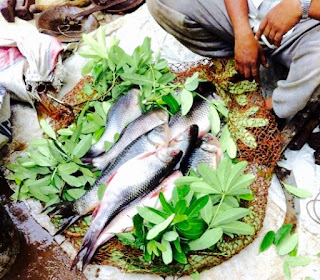 My friend Rana Kanishka agrees on this, during our years in Kendriya vidyalaya No-2, we bunked many classes; we use to go to Laxmi market several times but always with different interest. From there our ways use to separate, he straight away run to the video game parlor and my legs followed  to a shop called Desh bandhu, their mishti doi is to die for and  were served in mitti ka kullah. A nearby shop called 'Calcutta sweets '  also use to sell some high end Bengali sweets. Rasmalai of Sweet Valley, City center is the most famous sweet in Bokaro.

Uses of Gota Moshla (whole spice) Boti ( cutting instrument), Chulah (food cooked on stone charcoal/ wood / cow dung) Sil Nora (stone grinder) signifies the beauty of the Bengali & Bihari cuisine which reflects in their preparation too. Cha, lebu, lanka, boti and these words have different meanings than what one can think of. 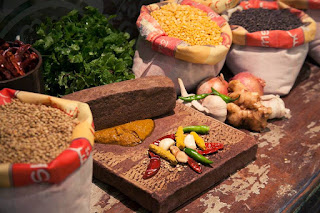 I have been lucky enough to know some amazing traditional Bengali specialities through my early days in Oberoi hotel. I remember Chef Avijit Ghosh who had been my inspirations. He always said Ashwani let’s  make this for the buffet aalo posto, khosa mangsho, suktho, macher jhol, paturi, galda chingri malai curry, and many delicacies, we cooked together for the “La Rochelle, Palms and 360 buffets.”

Following are few items, which I feel that have made my childhood memories unforgettable:-

Dal Bhat - A staple food always remains same. Bengali's likes their dal in kacha or bhaja both ways. One can have this with aalo bhujia, chokha, fried papad, dhania and aam or amla chutney. Mostly mug aur mosur dal is tempered with phoran. Usina chaawal (parboiled rice) or Arwaa chawal (the long-grained raw rice) both are preferred.

Fish curry - Fish is coated with turmeric paste and salt, then is   deep fried in mustard oil till it get crisp. Curry is prepared with yellow mustard, peppercorn, cumin, garlic, ginger red chilli, turmeric paste in the same oil in which fish was fried with phoran.

Shingara - A salted savoury stuffed with potatoes, garlic and peanuts which use to served with tomato and date chutney. Addition of kaalo jire added value to this Bengali chutney.

Ghugni chat - Every shopping complex in Bokaro has the thela of ghugni chat in the evening. They are shallow fried Potatoes tikki topped with cooked ghugni (white mutter), tamarind chutney, curd and seasoned with their own special masala.

Choler dal - Chana dal tadka is a very popular preparation in every house in this region. I remember my mother cooked it in best way and we all use to enjoy it with parantha. At wedding this dal is a must in Bihar and cooked in the same way like Bengali does along with small sliver of coconut goes well with luchi.

Bengalis follow goddess like Durga Ma and Kali Ma. They have immense respect for women. They nurture their daughters with a higher sense of gender equality. And it’s Baudi who unite the family. A lady dominated state rule by the women of the house is matter of pride to understand the need of the culture. One more thing I want to share that 'Bengali's mother in law never gives her cooking secret to the son’s wife as she always fear to lose her son'. Well, this is something about which I won't say anything.
It is my humble endeavour through this post to showcase my passion towards this sweet language and sweetness of Bengali cuisine is this article..."sesh paate mishti mukh. “Dessert for a full Bengali meal, “rasogolla aur misti doi...how can I forget to mention about rasogolla when i talk about Bengal. Others are being sandesh, khirkodom; ‘payesh’ is blended with 'nolen gur'. Nolen gur, in itself is treated as a desert, as it carries a fragrance and flavour of aristocracy and delicacy.Beauty and craziness of Nolen gur was seen in the Big B's moive Saudagar also. During winters, 'pithea', 'parisapta' are few sweets.
During Durga puja,'narkel-er naaru','sil-er naaru', has been the traditional sweets for centuries, which has been handed over from generation to generation. Adding on to the list is lengcha and sitabhog. One can feel the warmth, affection, care, love n sweetness in these sweets. And this write-up cannot be complete if I don't mention about the gota paan which the bongs enjoy after their meal.
In the end of the artical, I must admit that "Bengali khawar jonne bache'...Bengali lives for eating.....